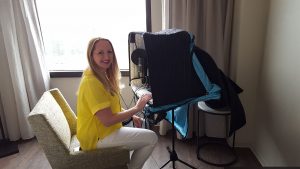 Voice Over Mobile recording studio ( VOMO)  with Surround Sound Hood (SSH) is the next step in Portable audio recording studio development allowing the voice actor to completely eliminate room tone and reflections in their recordings.

VOMO  Based on the COVB2.0 , so I will not describe the features of the booth itself in detail, but stop on the differences and benefits.

The demand for improving on the COVB2.0 came from professional customer’s feedback and chasing a better, more accurate sound.

1) the room tone was still being heard in the recording.  People were solving that problem by adding an extra blanket over their heads.

2) the loops for accessories were a bit annoying, people did not want to look at the accessories while recording, they were also getting in the way when opening or closing the booth

3) bottom strap was  not durable.  Arches would rip the grommet holes and fall out of the base strap.

5)  booth mounted on a mic stand was wobbly.

People never returned a single booth, for the reasons of the above issues, because everybody acknowledged the high quality recording environment it provided.  It was more like wishful thinking.

Eventually Dean Wendt, ordered the first custom “hood” to be made.  He did not know that it was going to be a hood. He said that he saw a demo I had made “not for public” where I suggested a small blanket to be thrown over the head,  and he wanted the actual fitted attachment to be made.

So it is with his blessing I would say, that the VOMO was born.

We started offering custom made SSH prototype and soon noticed that most people were ordering  COVB with the SSH.

SSH  made as a three sided “box” with no bottom. There are two rigid fiberglass support rods built into the “roof” of the SSH.  Note: when attaching the SSH to the COVB the rod channels should be on the lower ( inner) part of the Hood, not on the outside ( top) part. Outer end of the Rod channel equipped with D-rings to connect to the Snap hooks on the COVB.

The rod channels are not parallel. They are spreading outwards to provide better support of the hood.

When using the hood it should NOT be rested on your head. It should be completely supported by itself.

3. Accessories bag. In the COVB2.0 we were very proud creating a way of holding all the accessories on the booth’s back wall.  In reality it did not prove to be a good idea…. The Accessories were getting in  way of opening the booth, then if you put something in it – it would damage the pop filter. And when it looked like a “garage wall” with tools hanging all over. People did not really like it and some let us know about it.

So in the COVB3.0 we introduced an accessory bag, that is attached to the bottom of the support table by Velcro strips and it holds you basic accessories, such as script holder, Pop Filter, Miniboom and Micromic stand.  Only the Microphone mount was left inside the booth.

The accessory bag also has an additional functionality of balancing the COVB and making it a little more stable.

A special mould was created and after few tries the final buckle emerged.   The arches are installed in the buckle and have screws as axels to allow them swing into open/close position.

Currently buckles com assembled with straps sewn on it. But the ends of the buckle where the strap is connected to includes a self-locking design so if for whatever reason the strap needs to be replaced it can be easily done even without sewing.

Wobbliness.  Even though we had tried to address the “wobbliness “issue, it is hard to defeat gravity.

The booth itself weighs approximately 12 lbs.  With the SSH it weighs about 15 lbs.

Obviously if you balance 15 lbs on a ½ inch stick 5 ft in the air it will be a little wobbly.

This is where a shorter person can clearly claim an advantage!

If there is no need to raise the booth high , telescopic design of mic stand usually has enough strength to provide adequate support.at abut 4 ft height. Raise it another foot and the Mic stand gets “overextended”, which is never a good thing!

Stabilizer strap works well, but make sure that you tighten the mic stand well, otherwise the tension of the strap adds to the weight of the booth and can pull it down.

Second mic stand might provide additional security, if you just stick it under the booth as extra support.

7)  LIGHT! I almost forgot about the LIGHT!

I consider new LED light is a huge improvement over the COVB2.0.

And not just because it is cute, but it  is much brighter, the light is nice white, it is rechargeable, it charges from USB cord and can work from your computer or wall outlet.  It can stand on its own and it can clip to anything inside the booth.  We found that the best way is to clip the light to the base strap on your left or on your right .  I suppose you can also clip it to the hood, so it hangs down, or we left the elastic loops at the top of the booth, “just in case”

And now : pictures that “speak louder than words”.

(And if I add words to the pictures would that make them sing? Or just shout?)

Accessories bag located at the bottom portion of the table. It may be hidden by the Blue outer case.  It might be a little challenging to take the contents out of the bag, but I thought that you only do the set up once and I did not see any other inconspicuous place to fit the bag.  Leaving it loose inside the booth, did not look like a good option.  Bag is removable.

It is attached to the table by two Velcro Strips and can be taken out if necessary.
The bag has 5 pockets of different sizes: Left to right:

To Open the VOMO place it on a table, unzip the top compartment.  Reach inside and  Pull on the base strap.   Stop at approximately the level of the Side Velcro holds.  If you pull the base strap too much out, the top will be collapsing back.  Ideally the arches should form an upside-down even sided triangle.   The side Velcro holds designed to help keeping the arches spread apart. But it is optional.

Here is an example of the COVB feature that some people might not be aware of.

If for a voice actor the acoustic environment must be absolutely dead,  meaning no reflections and no room tone,  For singers some reflections may be beneficial.  The side panels of the COVB may be opened up and the top pushed back to open the mic to some liveliness of the room.

I think this is another benefit of the COVB that no other product can offer. (I was going to say in this class. But isn’t the COVB is in a class of its own? J )

Side Velcro Holds designed to close over the arches to keep them open. When closing make sure to “push the Velcro in between the arches so it sticks not only on the sides, but also in between.

To feed cords into the booth there is about 5 inch opening in each corner of the booth.

The Base strap Buckle. Provides smooth operation and assures that the sides are not damaged.

The buckle supports the arches allowing them rotated in fold/unfold position.   Buckle also designed to be connected to a strap without stitching.

Mic Mounting Bracket. The only one left inside the booth.

LIGHT.
The light  is very cute, flexible neck, nice bright ( but not too bright)  white light.

You need to touch that  little star to turn it on and it is a little slow to turn on/ off  ( LED has its own problems).  So if you do not drumming your finger on that star – it will turn on the first time.  Battery holds power for about 4 hrs.

It also has a little on/off switch on the back.. so it does not accidentally turn on in the bag and waste battery.

As I mentioned earlier you can clip it anywhere, but I thought the best way is to clip to the base strap:

When unfolded the Support rods must be on the inside.

As you can see the SSH completely covers the speaker from all sides.

And the lamp produces plenty of light. That generates no noise and practically no heat.

When SSH is not needed you can simply fold it back onto the COVB.

It actually will triple the layer of blanket on the sides and the top, and you can still record that way too.  It actually might provide better  reductions of noise coming from that direction

If SSH placed on COVB 3.0 on mic stand  SSH tilts the booth too much the front.   Using stabilizer strap allows to correct that and to straighten the booth position.

Booth structure the canopy and the hood are held in shape by fiberglass support rods.  In normal operations there is no need to take them out, but the booth covers must be washed, then the metal arches and support rods must be removed.